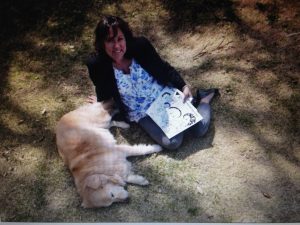 Jean Vinson sits under an oak tree at her Virginia Beach home on Thursday, April 2, 2015. Her coloring books are like the ones that are aboard the Navy hospital ship Comfort, to be given out to children in countries where it deploys. The books are translated into Creole and Spanish and educate on topics such as hygiene, environmental stewardship, and burn avoidance. (Vicki Cronis-Nohe | The Virginian-Pilot)

Jean Mackay Vinson’s coloring books started several years ago as a simple way to occupy children on a mission trip to the Dominican Republic.

Her husband, Dr. Steve Vinson, suggested they turn one of her self-published children’s books into something for the trip. So they took out the color and had it translated into Spanish.

The book was a hit. Children understood the pictures, even if they couldn’t read.

“I thought it was a one-time thing and didn’t really give it too much thought,” Vinson said.

Since then, Vinson has developed three educational coloring books. More than 44,500 have been distributed to South and Central America, India, Africa and Asia.

When the Navy hospital ship Comfort left Norfolk last week on deployment to 11 Latin American and Caribbean countries, 12,500 coloring books went with the crew to be distributed at medical sites, schools and orphanages.

The books are drawn with children and their surroundings tailored to specific countries. The scenarios are researched and discussed to ensure they educate, not upset.

The books also carry a message of independence.

“It’s also about being mentally strong because they can take responsibility for their own education,” Vinson said.

The first coloring book developed after the Dominican Republic trip focused on fighting parasites. It was developed with Dr. Lisbet Hanson, who had been treating women in Haiti.

Parasites that repeatedly infect people are a persistent problem there. Education about personal hygiene and lifestyle was needed, Vinson said.

The book, translated into Creole, was printed in 2010. The illustrations, by Dawn Stephens, show a boy and girl and their pet goat. In the story, the children wear shoes to keep parasites from entering their bodies. They use a latrine. They wash their bodies, hands, food and clothes. They also leave their pet goat outside.

“It seems like something so simple, especially in our culture,” Vinson said. “You wouldn’t really think that a coloring book would be such a powerful educational tool.”

After that, Vinson approached Physicians for Peace. With that group, she developed a book to teach kids to avoid burns by chemicals and fire.

“People don’t want us to come and tell them how to live,” Vinson said. “They want to learn and decide for themselves. I think it’s a matter of respect.”

When Vinson was a girl, she dreamed of becoming an author. She majored in English in college, but her path wasn’t a direct one.

The former marketing and public relations manager for The Founders Inn and Spa also had worked in advertising at The Virginian-Pilot. She was teaching in 2005 when she wrote “Rockin’ Roly Poly,” a book meant to inspire the kids in her class, along with her own two children, to read and write. Two years ago, she quit marketing to concentrate on the coloring books.

Earlier this year, she became a government contractor. But soon, she expects her company, JAMSBooks LLC to become a nonprofit.

More coloring books and other texts are planned for the future, along with translations in French and Swahili. And Vinson might pursue other educational materials, including videos and animation.

Since that first trip to the Dominican Republic, Vinson hasn’t visited any of the children that her books have benefited. She hopes to but for now enjoys hearing about the success from others.

“The different groups send pictures,” she said. “And that just touches me.”